Just as George Washington Carver exhibited vision, creativity and persistence, nominees should exhibit traits of innovation and pioneering efforts in the field of industrial biotechnology. This award was created to recognize significant contributions by individuals in the field of industrial biotechnology and its application in biological engineering, environmental science, biorefining, and biobased products.

As former Governor of Iowa and U.S. Secretary of Agriculture, Thomas Vilsack has been one of the industry’s strongest advocates toward the growth and development of the biobased economy.

As Agriculture Secretary, Vilsack identified the biobased economy as one of the four pillars that support our country's rural economy. As a result, the U.S. Department of Agriculture put forward a number of initiatives and programs that promoted renewable biomass and feedstocks, biobased products and renewable chemicals, advanced and cellulosic biofuels, plus rural infrastructure and manufacturing. Watch Vilsak accept the Carver Award on July 10 during the morning Plenary!

Rosalind Franklin Award for Leadership in Industrial Biotechnology and Agriculture

Sponsored by the Rosalind Franklin Society
Each year this award is given to an outstanding woman in the industrial or agricultural biotech who has made significant contributions to the advancement of the biobased economy and biotech innovation.

Reshma Shetty co-founded Ginkgo Bioworks, Inc. in 2008 and has been integral in driving the company's major partnerships with customers across multiple markets, including pharmaceuticals, agriculture, textiles, enzymes and more. With the goal of making biology easier to engineer, Shetty and the Ginkgo team have built labs that leverage software and hardware automation to bring rapid iteration, prototyping and scale to organism design and construction.

BIO Leadership and Legacy Award in Industrial Biotechnology and Agriculture

This award is presented to an individual who has shown exemplary leadership and who has dedicated a significant portion of their career to advancing industrial biotechnology and growing the biobased economy. 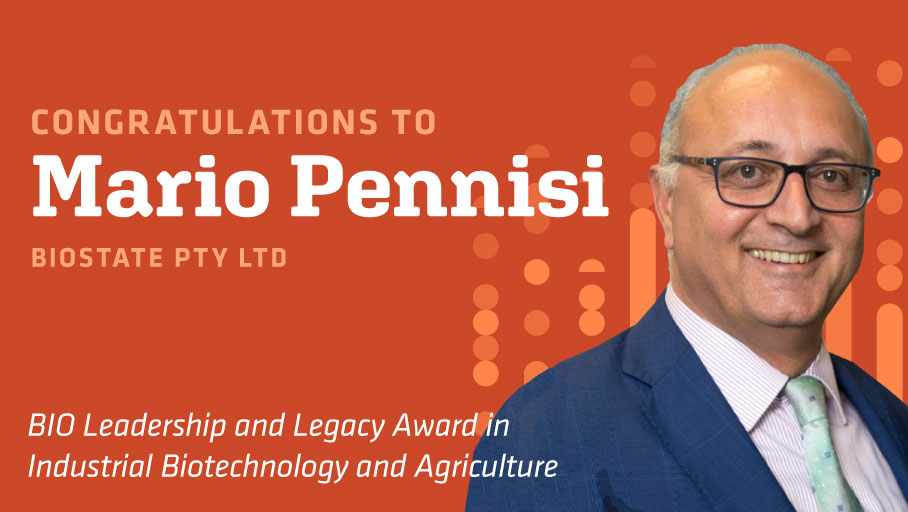 With a career spanning 35+ years, and named in 2018 by The Courier Mail as one of Queensland’s 100 Most Influentia People, Mario is an experienced and sought after life sciencesprofessional, industry advocate and trusted advisor, working closely with government, industry and academia.